Months of research into campaign contribution records covering Piedmont, CA, have produced a series of startling revelations concerning the outsized political influence wielded by this tiny, affluent town nestled next to the Oakland Hills in the Bay Area.

Piedmont, an unlikely city-within-a-city whose per capita income is three-and-a-half times that of surrounding Oakland, was at the end of 2003 the launching site of a coordinated intervention into the 2004 senatorial race in Pennsylvania. Records indicate that on New Year's Eve of 2003, three residents of Piedmont moved to load the coffers of one of incumbent Republican Arlen Specter's key campaign organizations, Citizens for Arlen Specter.

While a larger investigation is under way, some small measure of Piedmontese financial intervention is confirmed: one resident, a self-described homemaker, donated $250; another, an employee at a mental health services corporation, donated $500, and a third, a financial analyst for a Lake Tahoe-based LTD, donated $250. (The Federal Election Commission places a $2300 annual limit on campaign contributions per candidate.)

The political and economic elite of Piedmont have been tight-lipped about the matter, refusing response, and some have suggested, darkly, that a "blanket of silence" has settled over the city, according to one resident who requested anonymity per traditional Piedmontese protocol. The questions, however, remain: who else was involved in this coordinated scheme, who coordinated it, and who, if any, among the current City Council administration authorized it? Are similar operations still active? Have Lake Tahoe and Piedmont brokered a coalition designed to influence the direction of national politics? And perhaps more to the point, why did Piedmont engage in a possibly vast conspiracy to sink the chances of Democratic senatorial candidates in far-off Pennsylvania?
Posted by J.B.Best at 11:27 AM 1 comment:

Military Takeover of the Harvest Festival and CHIME Jazz Festival 2008

"Get the ammunition out the Pinto Hatchback,/ refer to this as Operation Snatchback"-The Coup

Sunday, Sept. 21
11:30 AM - 3:30 PM
Please join us for the 10th Annual Piedmont Harvest Festival. Show the world the bounty of your garden and tempt your neighbors with your culinary skills. This year’s festival will include the CHIME Jazz Fesitval, a carnival, as well as growing and cooking contests. As well as a full-scale military occupation by Oakland.

A day shy of the one year anniversary of the O.P.D. murder of unarmed Gary King, Jr., 20, the people of Piedmont will make themselves seen and heard by awarding a ribbon for The Most Unusual-Looking Vegetable.

As evidenced here, the white hairs of Piedmont will also engage in clandestine pagan practices of egg-worship. 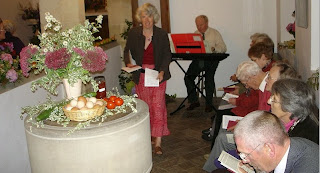 As Florence Reece's "Which Side Are You On" was to Harlan County miner strikes, this song is to the annexation of Piedmont.

Come to the East Bay, there is no neutral there.
Posted by J.B.Best at 2:07 PM No comments:

This is the home of the Alliance for the Reincorporation of the Renegade Province of Piedmont into the City of Oakland. (ARRPPCO is its slurry acronym.) We believe that the charmless tax fortress of Piedmont, as tiny as it is corrupt, must be brought to heel, preferably violently, and annexed by the city of Oakland.
Our facebook group.
The Piedmont Problem:

Contained entirely within the borders of Oakland, Piedmont was incorporated in 1907 as a racist, leafy tax paradise; by the 20's, it had earned the hideous nickname, "The City of Millionaires." Surrounded entirely by a city whose population is about one-third black, Piedmont's African-American population is 1%, or about 110 persons. Its substantial treasures have proven as immobile as its demographics; Piedmont is still annually registered in lists of the richest cities in the country. It's most well-known native sons are the noxious eugenicist and overhyped travel writer Jack London and the playwright and war criminal Robert McNamara, whose drama, "The Gulf of Tonkin Incident," won over rapt audiences in Washington and New York. Piedmont: a malignant mole on Oakland's back, but an operable one, a historical error, but a remediable one.

1. The seizure and redistribution of private property within the breakaway territory of Piedmont, and the nationalization of the sunset over Piedmont.

2. Prosecution of the banker junta currently conducting city politics in Piedmont, as well as surviving participants in former regimes.

3. An end to wife capture. The primitively bourgeois Piedmontese, in flagrant disregard of relevant federal statutes and the U.N. Charter on Human Rights, have been reluctant to abandon the practice of wife capture, often accomplished by midnight raids into Oakland. Startlingly, more than 70% of the population of Piedmont is married, which indicates just how thoroughly wife capture is embedded in the culture of the region.

4. The razing and uprooting of the oak trees lining its overpoliced streets. Two years ago, the Burmese military government relocated the capital to a remote jungle town, Naypyidaw, in order to better conceal its predations. Likewise, we can no longer allow the symbolic oak to give cover and comfort to quiet political crimes; Piedmont must be exposed to disinfecting daylight.

5. Immediate public access to shadowy Lake Tyson, rumored to be a cherry wine reservoir with ritualistic significance in PIedmontese culture.

6. The gradual "urbanization" of Piedmont and the subjection of Piedmont to history, patterned as a counterpoint to Henry Morganthau, Jr.'s program for the rehabilitation of postwar Germany. Piedmont has for a century immunized itself from history, it has bribed time and pickpocketed the archives. Therefore we resolve that Piedmont be forcibly restored to its pre-1907 condition, after which time it will undergo the same process of neglectful development and city hall scandal visited upon Oakland throughout the 20th century.
Posted by J.B.Best at 11:06 AM 6 comments: