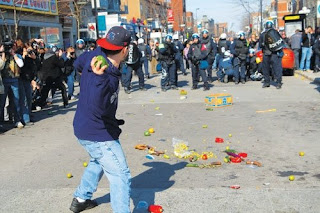 From the S.F. Chronicle of June 21st:

"Q: I read with interest your May 3 column. I live in Piedmont, and have two lemon (Meyer and Eureka) trees and three orange trees. They are all mature trees, and after 22 years, have the largest crop of lemons ever. I have not had a problem with them being eaten.

But some of the oranges have been totally devoured, leaving little pieces of rind all over the place. I had suspected rats, but last week I saw two squirrels climb up on the fence and actually pick an orange right off the tree. They took it into the garden and proceeded to eat half of it. I have had many half-eaten oranges over the past few years. Some are even half eaten on the tree."

The Chronicle columnist, Pam Peirce, responds to this seemingly innocuous question with a coded message suggesting that Piedmontese Contras arm themselves.

A: Rat experts say rats eat orange pulp, leaving the rind and lemon rind, leaving pulp, and will strip bark from citrus trees. However, references are silent on the citrus preferences of tree squirrels.

Here we have the second report of East Bay tree squirrels caught eating oranges, so now we know they do it too. You might be able to dissuade tree squirrels with a hot pepper spray. It wouldn't stop a rat, but squirrels are said to detest it."

The Alliance for the Reincorporation of the Renegade Province of Piedmont hereby claims credit for the liberation of these oranges from the elitist and oligarchic trees of Piedmont. Furthermore, ARRPPCO charges the plantlife of Piedmont with criminal nutritional complicity in Piedmont's dirty dealings, and would like to warn Piedmont that its lemons, too, are no longer safe. Finally, ARRPPCO would like to advise Piedmont authorities to review the Geneva Protocol and the Chemical Weapons Convention on the use of chemical warfare and reconsider its threat to arm local militias with hot pepper spray.

ARRPPCO neither confirms nor denies that the liberation of oranges from Piedmont's loathsome groves is a symbolic action meant to indicate either an orange level terrorist threat alert or the possible expansion of ARRPPCO activities southward into the vulgar suburbs of Orange County.
Posted by J.B.Best at 12:54 PM